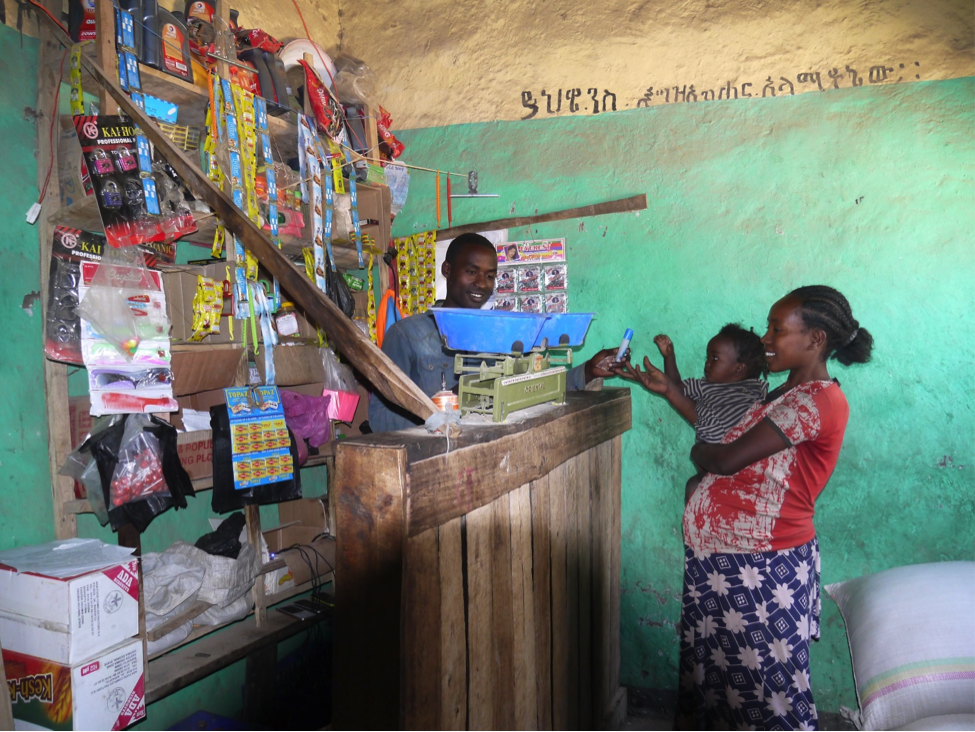 No Comments on Encouraging Encounters With Merchants in EthiopiaBlog L-IFTJuly 7, 2022July 7, 2022

Digital Money is a new phenomenon in Ethiopia. Through my interaction with various individuals, I realized that the majority has either never heard about it or does not really know what it is. Interestingly, the lack of awareness about digital money does not particularly refer to certain segments of the society. From students through to farmers, they all share this absence of knowledge in common. In this blog, we set a focus on how merchants reacted to this “new notion” i.e. Digital Money.

In April and June ’17 we traveled to different regions in Ethiopia [1] to conduct interviews with various types of merchants (from restaurant to shop owners). Once the respondents realized how mobile money could help them in their personal as well as business life, they became more amenable to our questions that were centered around their income, expenditures, how they buy their commodities, etc.

One discovery that immediately stood out was that most of the merchants travel long distances in order to buy their commodities from their suppliers. One of the respondents reported that he travels 45 km from Boricha, where his shop is to Hawassa every 3-4 days by motor bicycle and bus, which costs him 54birr [2] in total. Not only does he spend money for transportation, he further has to cover costs for food and drinks, while not making any money out of his shop in case his children cannot step in during his travels. We further discovered that almost all merchants hold cash in their pockets in order to buy from their suppliers. After having understood the service of Mobile Money our respondent stated:

“I think, if I am able to use my phone to send money to my supplier or to my relatives elsewhere, it would be very beneficial: it will save me from theft, it will save energy, time and unnecessary costs.”

When he was asked which amount of service charges he thinks would be fair, he came up with the following figures:

We met another Merchant from Wendogenet, who was really interested in Mobile Money. He is a Pharmacy owner, selling contraceptives and condoms.

“Hotels around this region frequently come to take condoms from my pharmacy in huge amounts. I want to use digital money as it makes my transaction easier. Especially when there are orders to buy condoms from the hotels at night times, it will be convenient for both parties: it will save time and energy”.

In addition to this, he stated that it would be a relief for him if there was a way where he does not have to carry money in his pocket, saving him from theft.

Another small shop owner from the same place told us an interesting but unfortunate story about what happened to him once and how that incident made him wish there existed a better way of handling his finances. For him to be able to earn extra money through other jobs, a relative helped him out in his shop. After a while, however, he found out that his relative has been stealing and sending money from the shop to his family back home without him knowing. He said that if all transactions were entirely carried out by mobile it would be easy for him to control the money flow of his shop. The increased transparency would help him overcome theft by staff members, furthermore, customers would not need to carry cash with them anymore

What we can conclude from this is that merchants in Ethiopia travel long distances in order to work their businesses and they hold large amounts of money in their pockets. Most of the respondents showed a big interest in mobile money service since it directly solves their problems i.e. distance, energy, time, and security.

Another important and encouraging point we discovered is their undoubted willingness to become an agent and to be part of the awareness creation process. One of our respondents from the Addis Ababa region gave us a detailed explanation on this matter:

“I find digital money very useful and I would like to be part of the teaching process. I’m already used to explaining my commodities to my customers, so informing them about mobile money will be easy. As I know most of them, they will likely pay attention, while feeling comfortable asking me questions. I want everyone to know about this service and if I can be part of the process of creating awareness to people, I would be much honored.”

The lack of awareness about mobile money clearly stood out in our research. In the process of our study, however, we found out that almost all of our merchants showed a high willingness to quickly learn about it and to become part of the awareness creation movement. After being introduced to different scenarios on how to use mobile money, all of them agreed that they would want to start using it right away. The only thing that is holding them back is a lack of knowledge on its usage. Hence, if this barrier is steadily eliminated by continuous teaching and follow-up mechanisms, they could start using it and additionally spread the service throughout. It was really encouraging to see the reactions of the merchants, their willingness to really listen, to be eager and interested in the concept. With proper attention and careful introduction, we believe that digital money can perhaps become a merchant’s best friend.

By Frehiwot Sinishaw
Programme Assistant based in Ethiopia

Encouraging Encounters With Merchants in Ethiopia