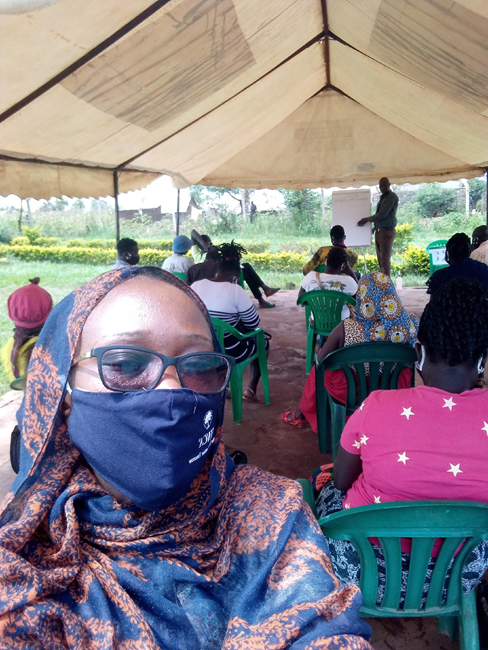 My name is Rachael Dusio. I am from South Sudan. I have a BA from Makerere University, Uganda in English Literature. I have been teaching in many schools from 2004 up to 2014 in Uganda, Sudan, and South Sudan. I have now lived for 7 years in Kiryandongo. Starting From 2015 to date, I have been doing Field Research for various humanitarian organizations.

Taking up research work with L-IFT was very exciting. This was because the research was unique in nature, different from the ones I had done for other organizations in the past. It was my first time doing diaries research.

At the onset of these diary interviews, I moved to the field with a colleague and we would sit together as one person would be conducting the interview. I started this job soon after completing data collection of PSNs for UNHCR, so most of the respondents thought I had brought feedback for them. I struggled to explain to them that this was a different thing and interviews would be with repeated questions. As I moved through the settlement many refugees ran after me begging to be recruited for the interviews because they thought I was registering people for assistance. Respondents who were not chosen for the diaries after the baseline interviews still ask me why they were dropped. Others who discovered later that I recruited refugees for this research followed and criticized me for being discriminative.

When we started the diaries, books were printed and given to us to distribute to the respondents. I had to teach respondents how to use the diaries. Those who knew how to write accepted the books while those who cannot read or write rejected the books. Some questions in these diaries amuse the respondents so much that they laugh before they give their responses. For example; how do you feel today? and Which of the following assets did you acquire in the last two weeks? Some people are very poor hence they laughed and asked where can they get such money.

In the middle of the corona lockdown, L-IFT gave some tokens of appreciation (soap, rice, sugar, and salt) to the respondents which made them very happy.

Currently, some of the respondents are participating in financial literacy training provided by FINCA. They are very grateful for the knowledge they are gaining. Although others have dropped out of the training as it is harvesting season.

The respondents ask all the time if L-IFT intends to give them loans because there are always questions about taking loans. Sustaining respondents on these diaries has been a challenge as most of them are always busy with either garden work or domestic chores. Another challenge has been phone interviews; most of them dislike it.

Some of the challenges I faced included the accumulation of tasks because respondents who were transferred from another researcher have not been cooperating with me very well. Phone interviews as a result of COVID- 19 have been a problem when you are interviewing a respondent who has younger children, as she will take off some time shouting at the children.

Interviewing those who have business takes longer because they keep on attending to customers. If I interview them on phone, it will take days to finish an interview or they tell you to call them at 10 pm. Some of the respondents, who were transferred to me, are in poor network areas so phone interviews are impossible. Some respondents constantly ask when these interviews or diaries will end: expressing impatience. Moving to the field and not finding respondents in their homes was very much challenging. Respondents spent more time telling their problems when I ask them: How do you feel today?

The most challenging task was to trace respondents who transferred to me from another researcher. I tried to call them on phone; those who received the calls said they were no longer interested in the interviews; other respondents never received their calls. So the only option available to use was GPS. I traced these respondents working for 12 hours daily, sometimes I would find two in a day, and on other days would find none.

However, from my experience, I learned to locate respondents using GPS points. I learned patience; some respondents could become rude just because of their own daily stresses of life, others expected tangible benefits and I stood on my ground, to tell the truth. I learned to work extra hours in order to beat deadlines. I have become more skillful in data collection using mobile phones and I am thankful to L-IFT for everything.