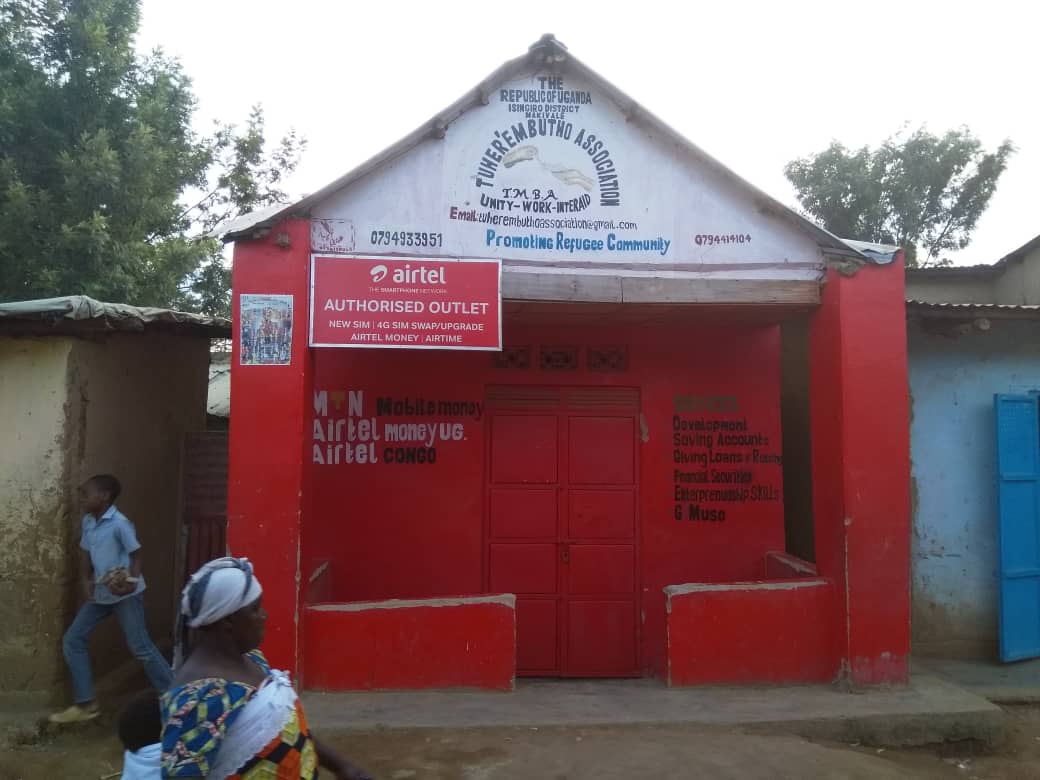 The TMBA, a financial association located in the Nakivale refugee settlement, was formed in 2016 by 9 members who are all refugees. It started as a ROSCA group, whereby all 9 members would contribute 2,000 UGX per week, plus a starting contribution of 10,000 UGX. ROSCA [1] stands for Rotating Savings and Credit Association. It is sometimes named ‘merry-go-round’. In a ROSCA group, members contribute weekly, out of which a pot of money is formed. This ‘pot’ is given to a different member each month, to keep, without obligation to repay. By contributing monthly, you build up the right to receive the pot once per cycle. The monthly pot is given in turn to each member. . This money can be used in any way that has the priority of the recipients: for instance to grow a business, start a business, pay medical costs, or send their children to school. Covering these costs might otherwise not be possible for these people without such a group, as saving is extremely hard for most refugees, who lack access to financial services and a steady income to save more easily. The group grew steadily as new members joined. Eventually, the group transitioned from a ROSCA system to an ASCA system. ASCA stands for Accumulating Savings and Credit Association. You read the definition in the footnote [2]. Their reasoning for this switch in savings methodology was that they could increase the total money pool by gathering interest from every member, thus making it possible. This means that members contribute monthly with at least a minimum amount and the possibility to save five times the minimum. This money is pooled together as a group fund, just like with ROSCA, but it is not given to anybody. Instead, members can request a loan from the group fund. This loan needs to be paid back within a certain amount of time with interest. At TMBA, members pay 5% interest per month. A loaning member can her/himself set the number of months that they will need to pay back the loan, which is usually one to four months. This means that the member has an influence on the amount of interest they pay; if one were to pay it all back in a month, the total amount of interest would be just 5%. Every additional month the loan is held adds another 5%. This both rewards a quick repayment and adds more capital to the total cash pool available. As the total amount of members grew, a system of subgroups was introduced wherein smaller groups of 8 to 10 people could decide on the amount of money that is contributed monthly. In these groups, the members choose a leader and a secretary for themselves. Six months after joining as a member (and contributing savings), a member can start to apply for a loan. TMBA keeps the initial savings as a guarantee; if a member of a subgroup doesn’t pay their loan back, TMBA still has the cash to secure their financial safety. This way, every subgroup is “covered” by all others. In fact, TMBA is now a type of federation of ASCAs.

This ASCA federation’s financial stability rests on the members’ (and organizers’) confidence that (almost) everyone will be able to pay back their loans in time. Through this system of ASCA federation with central deposits for each member ASCA, TMBA is able to offer loans to non-members, as the gains made from the interest on the loan repayment grew their capital sufficiently to do so. Although the TMBA’s leadership was unclear about this part, it seemed that they take at least part of the interest made on the loans provided to their members. TMBA doesn’t safe-keep the money themselves: they have a deal with Moban SACCO [3] whereby they store the money at Moban at a price of 5,000 UGX per month. While TMBA’s leadership is unhappy with Moban because of the fees and a lack of access to loans, they have no other choice but to do business with them; Moban is the only financial institution available in the settlement and hence the only safe deposit option TMBA currently has access to.

To prevent members from committing fraud, e.g. applying for a loan with a business plan and using the money to pay for medical costs, TMBA introduced a system where they would buy the necessary items for the business themselves. This item is given to the member and it is paid back like a loan. Interestingly, this system closely resembles the ‘buy now, pay later’ system. Some members get a cash loan, and others get an ‘item loan’. TMBA could not make clear who gets what, and why.

In 2018, the member total had grown to about 200 people, so the original 9 founders decided to use TMBA’s capital to build an office. However, this would later cause a few problems for the association. Due to the high costs for construction (8,000,000 UGX) the association soon found itself lacking the cash to serve every member when they would apply for a loan. This, in turn, caused the total amount of members to decrease, which further hurt the TMBA’s cash supply.

As a solution, TMBA introduced a new policy whereby the ‘veteran’ members get loans easier, as they are more trustworthy; they have proven themselves in the past. Judging from the declining membership, it seems that this policy has made some people unhappy.

The 9 founders of TMBA saw that they could help other people with their money, while also helping themselves. Their mission is to help refugees in the camp grow their businesses. They hope to grow in size, to increase the available funds for on-lending, which allows them to help even more people. The founders of this association, who, interestingly, lack any banking experience whatsoever, put all of their passion into this project. They witnessed the camp’s situation and they improvised, which led them to almost create an entire bank from just their imagination. Their mission is to eventually become a SACCO themselves, like Moban, or even a bank.

[2] ASCA (Accumulative Savings and Credit Association): Each member in the group contributes savings at each meeting. The savings are lent out to the members and these loans have to be repaid. Usually, the group works in cycles and periodically they “share out” giving all savings back to the members plus interest paid on the loan. This is DISTRIBUTIVE ASCA (ASCA stands for Accumulating Savings and Credit Association). It is also named VSLA, SILC, and other words. NON-DISTRIBUTING ASCA means the group keeps on saving indefinitely, without share-out. If you want your savings back you leave the group. You can always take loans.