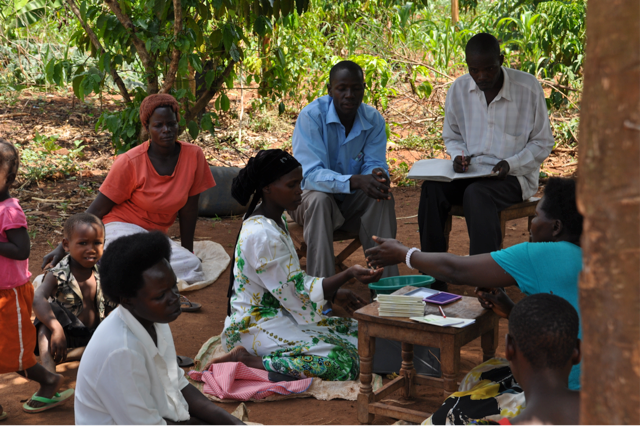 Through my field interactions with research respondents, I started wondering how they usually get loans. The first institution, which probably comes to one’s mind, is a bank. However, when I asked Khainza Nuru, a study participant in Mbale, her answer was ‘ekibina’, which means “group” in the local dialect and basically refers to Savings Groups. Khainza’s response was no exception, several study participants I met in the Far Eastern part of Uganda expressed similar sentiments.

In most parts of Uganda, formal financial institutions in the FEDU project area are concentrated in towns. This means that vast swathes of the population outside these towns are starved of financial services. This absence of formal financial institutions explains the popularity of informal local financial solutions such as “Village Savings” and “Loan Associations”. Those groups provide an opportunity to make financial services available to the poorest of the poor. Often, they are the only viable alternative for people such as Irene Nabuleke, a study participant from Manafa. Her little income and the 50-mile distance to the nearest bank make it impractical for her to access and use formal financial institutions. This drove her and a few of her village friends to start a savings group. Irene’s group has been in existence for two years and comprises 20 members. When I asked Irene why they decided to start a savings group, her answer was blunt: Poverty.

The savings groups offer a relatively safe place to keep the money. Members make small savings until there is enough capital in the group to begin lending. They manage the group themselves, make decisions about who can receive loans and what the terms are, and hold each other accountable for the repayment of their loans. Group members need each other to be successful and repay the loans, so that money is available in new rounds of lending. For Khainza Nuru the flexible borrowing terms and the small interest rate were what led her to join a savings group. Her most recent loan was worth 100’000 UGX, which she used to rent agricultural land to grow maize and beans. Other times she acquired loans to be able to pay her children’s school fees amongst other expenses.

Most of the beneficiaries of the groups I interacted with are women; often they are comprised entirely of women. This is especially vital, as women, in some of these communities, are disproportionately excluded from financial systems and decision-making. For some of these women, savings groups are much more than just their community bank – they provide them and their families greater choices in their day-to-day lives and an opportunity for a brighter future. It allows them to save money and acquire micro-credit, which they can invest in other income-generating activities such as agriculture.

Despite the success of these savings groups, nonetheless, they face some of the same challenges, such as misappropriation of group money, poor record-keeping, and bad debts. As compared to formal institutions those informal groups lack the expertise. Irene’s group faced the dishonesty of some of the group members, which is a common challenge. Apparently, some of the male group members conspired and sold the group’s investment, a cow, which was worth $500, and embezzled the proceeds from the sale. As a result, they took the decisive step of purging the group of all its male members and stopped admitting any males to the group.

It was remarkably refreshing for me to hear from members how thankful and appreciative they were of their ‘bank’. After interacting with some individuals, I highly value the role they play in communities excluded from the formal financial systems. I feel that further support to their operations has the potential to improve on well-being of financially excluded populations. The micro-credit these groups provide allows agricultural productivity to increase, which is a significant part of the rural economy.