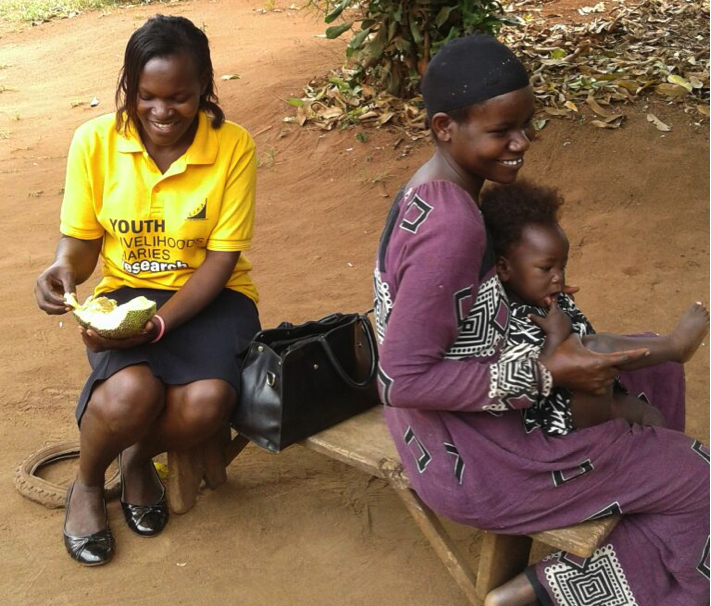 No Comments on Rebecca’s Experience Working as a Team SupervisorBlog L-IFTJuly 6, 2022July 6, 2022

Each of the regional clusters of the FEDU project areas was under the leadership of a team supervisor, who acted as the link between the project management team and all the local stakeholders. Ajambo Rebecca, one of the team supervisors in the central districts of Mukono, Kayunga, and Buikwe shared her experience working with the finance and energy diaries project. Below are excerpts of my interaction with Rebecca.

Tell me more about your background before you began workings as a team supervisor with finance and diaries research?

Between 2015 and early 2016, I worked with L-IFT as a field researcher for the youth livelihoods diaries project. I worked with respondents in Buswiga, Iganga district.

How did you experience your work as a field researcher?

It was a great experience, I think I learned a lot from my work as a field researcher. Though it was initially difficult to get unfettered cooperation of the study respondents, as some were reluctant to share pertinent personal information, with some even suspecting that the research could be a cover for land grabbing. However, with time I gained the trust of my respondents and they became more willing to interact freely. Nevertheless, I was struggling with expectations for money, as some respondents thought that because it was a livelihoods research, we could provide them with business startup capital.

Did your work as a field researcher help you in the role as a team supervisor?

Definitely. As a researcher, I had been exposed to most of the practicalities of carrying out diaries research. When I became a supervisor, I had to engage with a number of stakeholders and respond to some of the issues that came up in the field. In most cases, these were challenges I had come across as a researcher and this enabled me to effectively provide solutions to the field researchers and also inspire them to fulfill their assignments.

How do you rate your experience working with your team of field researchers?

I am very proud of my team, which is composed of six researchers. I enjoyed every bit of working with them, especially because of the work ethic they exhibited: submitting the surveys in time, updating me on their work plans, and informing me of any challenges they experienced in the field, which were many.

What are some of the challenges you experienced in your work with the research project?

Apart from the usual field challenges of extreme weather and connectivity issues mostly in rural areas, in some of the communities, we were dealing with distrust. This was especially in areas that were faced with land grabbing issues. Some individuals thought that the intention behind the study was to grab their land and they even prohibited photos from being taken of either themselves or their property until the end of the research. Additionally, I had to deal with requests for money. When some respondents saw me in the field, they would expect me to provide them with money and I had to reiterate that the research is voluntary with no monetary rewards for participation. It became sort of a song. These were some of the many challenges, which came up, but we managed to deal with them.

What aspect of your work did you especially enjoy?

I especially enjoyed my time with the respondents and researchers, meeting with individuals of different backgrounds. During my work, I had to take up the role of both counselor and teacher for both my team and respondents. You might find respondents in a miserable state and you have to counsel them before you start with work.

How has your work as a supervisor affected you professionally?

I have grown to be a better person and leader during the course of my work as a supervisor. The research included a number of educative aspects which have also been helpful to me, things such as writing resumes and cover letters and financial literacy. Some of these skills have become part of me. I can claim that I can handle my finances better now. I feel my experience has made me a good team player and listener and will enable me to perform better in similar leadership positions in the future.