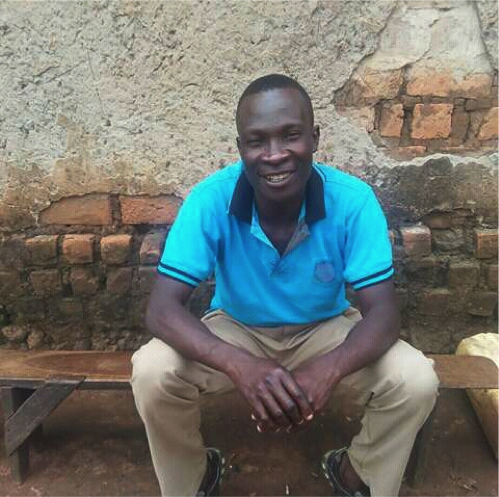 As the Finance and Energy Diaries Project Uganda (FEDU) is coming to an end, I interacted with some of the field researchers, who over the past months played a critical role in the execution of the FEDU project. I was especially interested on their opinions on how working with FEDU project has empowered them. For this post, I met Julius, a field researcher in Busede, a scenic village located a few miles from Jinja town.

Julius Kimalyo is one of the FEDU Field researchers. Unlike most other FEDU researchers, Julius has had the unique experience of having been both a respondent and researcher in a dairies project.

After having participated in the Youth Livelihoods Diaries Research Project as a study participant, Julius successfully sought to work as a field researcher for the FEDU Project, a task he has been executing for the past few months. Julius feels his experience as a respondent and later as a researcher has been both educative and empowering, enabling him to acquire new competencies and explore opportunities to secure his future. This is perfectly conveyed in his final remark of our interaction: “L-IFT has uplifted me”.

From inspiration to action

Julius passionately recounts his experience as a study participant. He initially thought the role of a research respondent was that of only providing information to the L-IFT field researcher every two weeks. In the back of his mind, however, he expected that the study findings will be used to develop effective interventions to improve young people’s livelihoods. He was impressed by the amount of information included in the bi-weekly interview questions, which ranged from agriculture and earnings to financial behavior. The interviews inadvertently morphed into ‘learning sessions’, as the questions included many ideas, which were either new to him, or he had never critically considered.

Being a respondent in the livelihoods project inspired Julius to engage in income-generating activities. After the livelihoods research project ended, he started growing sugar canes for sale to the local milling factory and with some of the former research respondents, he initiated a youth group, which is currently engaged in poultry rearing.

“We started a small poultry farm which currently has over 200 birds now. Every two weeks we meet to share the money acquired from selling eggs in the farm, each of the 10 members gets at least Ugx. 20.000. We are now working on formally registering the group, which will make it easy for us to expand and get credit to fund additional projects”. – Julius

During the past few months as a field researcher, in addition to acquiring skills in primary data collection using new technologies, Julius says that he has gained a host of skills and ideas in areas such as financial literacy, financial inclusion, accountability, business planning, entrepreneurship and writing of professional documents. He mainly attained them from training sessions and the bi-weekly team meetings organized by L-IFT.

“During the bi-weekly group meetings, we had training sessions on writing CVs, application letters, brochures and other business related documents. I must confess, previously I had a weakness in this area. I recently helped a friend to write a CV and he was shortlisted for a job he had applied to; it was a great experience, I especially thank Marcienne for the input during those training sessions”.  – Julius

Julius further indicates that working as a field researcher has enabled him to interact with people of different social and cultural backgrounds, sharpening his communication skills. From this he has built professional connections both within the community and with other researchers from other parts of the country; connections he feels will be valuable going forward.

Looking forward to a brighter future

As the FEDU project comes to an end, Julius hopes to further explore employment opportunities. He is confident that the experience and skills acquired while working as a field researcher will make him a more competitive candidate. Nevertheless, he hopes to put greater energy into the agricultural projects he has started and considers venturing toward piggery.

L-IFT Has Uplifted Me