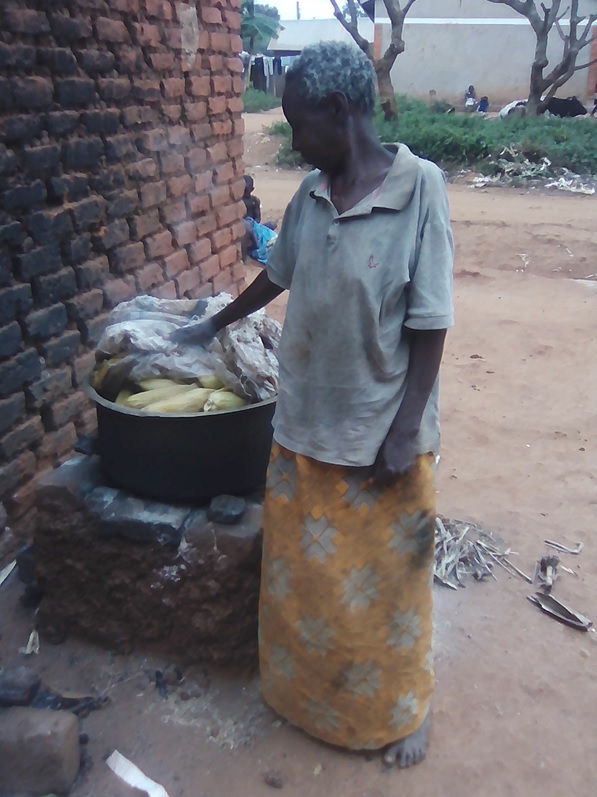 On Saturday this week, I joined the FEDU researcher as she returned to some of the respondents I had also visited a few weeks ago on the outskirts of Mbale town. Two of the respondents, a grandmother, and a young man both staying in the same locality of Nakaloke a suburb of Mbale municipality were enthusiastic about sharing their daily life stories, aspirations, and challenges.

It was 2 pm. As we arrived at the respondent’s homestead, she was finalizing serving a meal of Ugali (thick maize porridge) to her three grandchildren who were seated around her. In the courtyard shared amongst a number of other families were the sounds of children running and playing and an imposing sight of a huge saucepan cooking on a newly built outdoor cooking stove.

This was my second time visiting the homestead. In the previous visit a few weeks ago the respondent had been sick. We had been informed by her colleagues at the nearby market that day that she hadn’t been able to go to the market and we later met her at home complaining of chest pains.

She has two adult sons and a daughter currently based in South Sudan. She cares for her

daughter’s three children. The daughter had always been the main breadwinner for the family. And like a number of other traders in Uganda and the region had gone to trade in South Sudan as the country recovered from the conflict to benefit from the economic boom which followed the post-independence period. But since the start of this year, her fortunes have begun to change and she hasn’t been able to provide any financial support to her mother.

The ongoing civil war in South Sudan had derailed her business and she was no longer in a position to provide the support she used to provide, to take care of the respondent and her grandchildren. This brought home how interconnected economies are and the fact the possible insecurity has a personal impact on individuals living thousands of miles away.

“My daughter has always been supporting me. But since the start of this year, I haven’t received anything from her.”

The loss of this vital line of financial support from her daughter had a profound impact on her livelihood. Leading her to start a small business selling sugar canes in the local market in order to cater to day-to-day expenses. However, one main challenge she faced after months in this line of trade was the distance involved in carrying the canes from the farms which were over 2 miles away from the market. She further highlighted that she felt the weight of the canes was taking a toll on her health and was worsening the recurrent chest pains she had always been experiencing.

That is why she decided to switch from selling sugar canes to selling cooked maize which is instead transported to her home by the “wholesale” suppliers and later carried by her grandchildren to the market stall. She buys raw corn and cooks it before reselling it at the local market. Each day she purchases corn worth Ugx. 10,000 which is slightly over $3. On selling this she gets a profit of Ugx. 2,000 daily which she uses to care for daily expenses including food, fuel, water, and charcoal. The capital of Ugx. 10,000 is used to make purchases for the next day. However, the previous business of selling sugar canes had a significantly higher profit margin than the maize trade however because of the medical complications she was left with no option but to stop it.  Though she was anxious about what she will sell when the maize season ends. The sales from the commodities at the market are usually predictable though she scorns paying the daily market dues of Ugx. 600 charged each other day by the local administration without consideration for the profit margins of the items sold. She had thought of getting small loans but because the goods she sells are perishable she felt it was too big a risk to take as she can’t be sure of the ability to make repayments. She decided against it.

To supplement her maize business, the respondent also engages in subsistence agriculture. Though due to the size of the garden she doesn’t get much out of it. To maximize output from the garden she grows a combination of maize, cassava, and beans for consumption only and doesn’t make any sales from the garden. She wishes she had a larger piece of land and could produce more of the food she eats and spends less of the income she gets on growing the business rather than.

Like a number of other parents I have interacted with during the past two months, she values education and one of her current challenges is clearing the overdue school fees for the current school term for her three grandchildren. Previously her daughter had been the one paying all the school tuition but due to her current challenges, she hasn’t been able to provide any money for the current school term. The grandchildren attend a local day private school where school tuition is Ugx. 40,000 per pupil.

Because of her good record of clearing all the school tuition in the previous terms, the school administration allowed her grandchildren to continue studying as she looks for money to clear the school debt. She hopes will be able to clear all the outstanding school tuition before the closure of the school term.