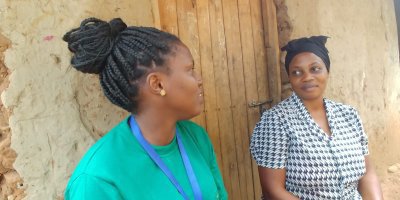 No Comments on One of L-IFT’s Field Researchers in Nakivale Refugee Settlement: Kamikazi NellyBlog L-IFTJuly 12, 2022July 12, 2022

In 2015, Kamikazi Nelly, a 34-year-old Burundian businesswoman, had to leave everything behind to come to Nakivale. The Burundian government had burned her very successful clothing business, and the Burundian police were known to kill and torture citizens. She fled to a different part of Burundi first with her mother, her sister, and her younger brother. They sought protection in Rwanda after it was clear that Burundi wasn’t safe anymore. While they expected to be able to return 2 months later, the opposite was true. Burundi continued to be incredibly unsafe so the family continued to Nakivale, in the South-West of Uganda.

Nelly finished her Master’s degree in Marketing in 2012. She went on to become a successful Businesswoman in her country. Her life in Nakivale was the opposite of her life in Burundi. When she arrived, she and her family had nothing. Nelly was forced to clean the houses of other refugees and sell charcoal for 6 months. Things took a turn for the better when she found out about a new business opportunity: using unused refugee IDs to get extra food at WFP’s distribution point in the camp. She could then sell that food, and it allowed her to build a bigger house and buy extra household items. With this money, she was also able to open a small boutique along with her siblings. In 2018, Nelly began to learn English to be able to get better jobs, like the one at L-IFT. In June 2019, she discovered through contacts of hers an open application for a researcher position at L-IFT. She applied for the job when the contact information was sent to her by her contacts and then went on to go to her first-ever job interview. After a second interview, she was selected by us to attend a training session in Kampala. Then she also got through the second round of selections, right after the training, when the L-IFT research team was appointed. She has been working at L-IFT since the end of July 2019.

According to Nelly, this job has taught her to be more confident, and it allowed her to be introduced to other refugees in the camp. Some of them were so poor that it opened her eyes to the situation in Nakivale, and it motivated her even more to help others in the camp. Nelly said: “it is beautiful to see that we can help people just by asking them questions and making them think for themselves. So many refugees have started to take better care of themselves during their interviews with me. I hope I can continue to empower those people with this job.”