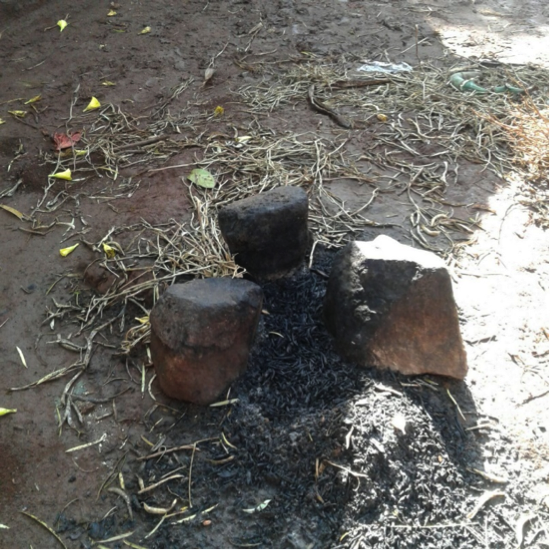 During my field visits to rural study participants, a frequent sight was the thick smoke billowing from the respondents’ kitchens. Some of these kitchens were straw-thatched mud houses, others were iron-roofed mud structures or even makeshift structures. The kitchen walls were often soot-coated, blackened by smoke from open fires. This blog is therefore dedicated to respondents’ energy usage, especially in relation to cookstoves.

When I visited Esther Namutosi’s homestead in the Manafa district, I noticed that her kitchen was starkly different from other homesteads I had visited: clean and not soot-coated. Her secret was a basic improved mud stove with an outlet to transfer soot out of the kitchen. When I asked Esther, why and how she decided to adopt the specific stove she uses, she claimed it was her husband who developed the stove.

During my talk with her husband, I learned that he acquired those skills after attending a short energy-saving training organized by Red Cross. During the training, they were informed about the adverse impacts of using open fires for cooking and trained on how to make their own energy-efficient stoves using locally available materials. Proudly, he showed me how his self-made stove works and how he made it.

Esther has a very positive appraisal of her modified cooking stoves. Having previously used a three-stone open fire, she felt the modified mud stove version was both energy efficient and clean. With the new stove, she says she can cook more meals using the same amount of firewood she used to consume before. Most importantly, she no longer cooks in a smoke-filled kitchen, which caused her to develop respiratory complications among others.

“With the improved stove, I can cook up to 3 meals using the same amount of firewood I used to use to cook one meal while using the previous stove. The kitchen is cleaner as all the smoke goes out through the smoke outlet” – Esther Namutosi

Irene Nabuleke, another study participant, uses both, a three-stone stove and a similarly modified mud stove. Although she feels it is energy efficient, the improved mud stove easily destroys saucepans, which is why she only uses it occasionally. Besides, because her family is small, she doesn’t worry much about the amount of firewood she uses.

Cost, ease of use, and availability of firewood often came up as the main reasons for a preference for three-stone stoves. Although the three-stone stoves are both easy and convenient to use, their high consumption of firewood and excessive pollution makes them an unsustainable option in the long run. Basic improved mud stoves, like the one adopted by Esther Namutosi, represent an efficient alternative that can limit indoor pollution and the amount of biomass used in cooking.

It was discovered that the most common form of cooking fuel still is wood, with charcoal as a runner-up. Just over half of the respondents currently have no real perceived difficulties obtaining wood, so presumably, their situation is not challenging enough (yet) to switch to other cooking energies. Read more about these results in our Research Pearl.